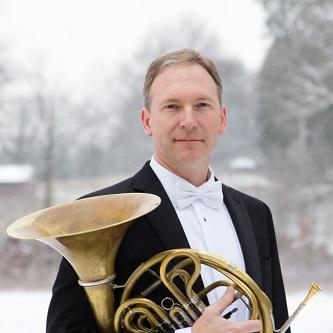 Stephen Foster received his Bachelor Degree in Horn Performance and Music Theory from Western Michigan University in 1993 and his Master of Music in Horn Performance from Rice University in 1995. Mr. Foster has won several solo competitions including the Western Michigan University Concerto competition, the Music Teachers National Association National Young Artist Competition, and the International Horn Society Premier Soloist Competition. Mr. Foster has studied horn extensively with William VerMeulen and Johnny Pherigo, and has received coaching from Thomas Bacon, David Krehbiel, and Gail Williams. He has had much chamber music experience including being a four-year member of the nationally awarded Russell Brown Brass Quintet, and as natural horn performer, having received a grant to perform three chamber works (Brahms, Mozart, and Beethoven) on the natural horn. Most recently, Stephen has played with the Durant Street Winds as a founding member since 2012. He has been 2nd Horn of the Lansing Symphony since 1996 and Principal Horn of the Jackson Symphony since 1998. Stephen, a native of Jackson, is Senior Project Manager at Jackson Automatic Sprinkler and lives in Spring Arbor Township with his wife, Shelby, and two children.