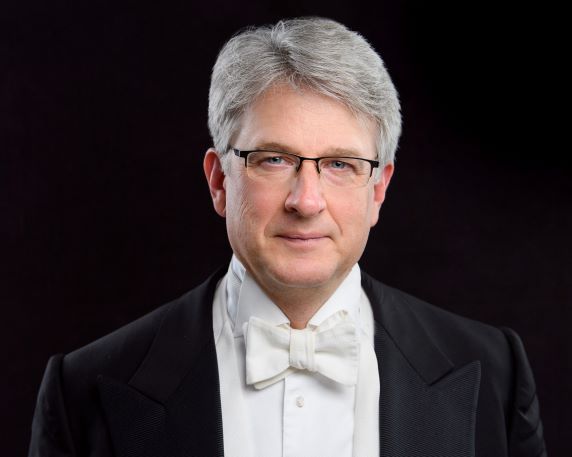 Timothy Muffitt first appeared with the Lansing Symphony Orchestra in 2005 and was appointed Music Director in 2006.

He continues to appear as a guest with leading orchestras throughout the country and is recognized as a strong proponent of community arts education using not only public appearances, but also radio and social media to share insights and experiences in great music. Past guest conducting engagements have taken him to the San Francisco Symphony, the Atlanta Symphony, the St. Louis Symphony, the Hollywood Bowl Orchestra, the Long Beach Symphony, Columbus Ohio’s Pro Musica Chamber Orchestra, the Buffalo Philharmonic, the Virginia Symphony, the Grant Park Music Festival Orchestra in Chicago, and the Symphonies of Houston, Phoenix, Edmonton, and Spokane among others. He has worked with many prominent performers, including Renee Fleming, Lang Lang, Yo Yo Ma, Dame Kiri Te Kanawa, Alicia de Larrocha, Pinchas Zukerman, Van Cliburn, Lynn Harrell, and Itzhak Perlman.

In addition to his role with the LSO, Muffitt also serves as Artistic Director of the Chautauqua Institution’s School of Music in Chautauqua, NY and conductor of its Music School Festival Orchestra, one of the country’s premier orchestral training ensembles. In 2019, Muffitt was named Music Director Laureate of the Baton Rouge Symphony Orchestra after 21 seasons as the organization’s Music Director. Muffitt has also served as the Associate Conductor of the Austin (TX) Symphony and as Artistic Director of the Louisiana Philharmonic’s Casual Classics Series in New Orleans, for which he was awarded a Certificate of Meritorious Service from the American Federation of Musicians.

Born in Bridgeport, Connecticut, Muffitt began his musical studies at age seven on the piano and later added the viola and trumpet. He studied at the Eastman School of Music, where he earned the Doctor of Musical Arts degree and earned Bachelor’s and Master’s degrees in music from The Ohio State University.