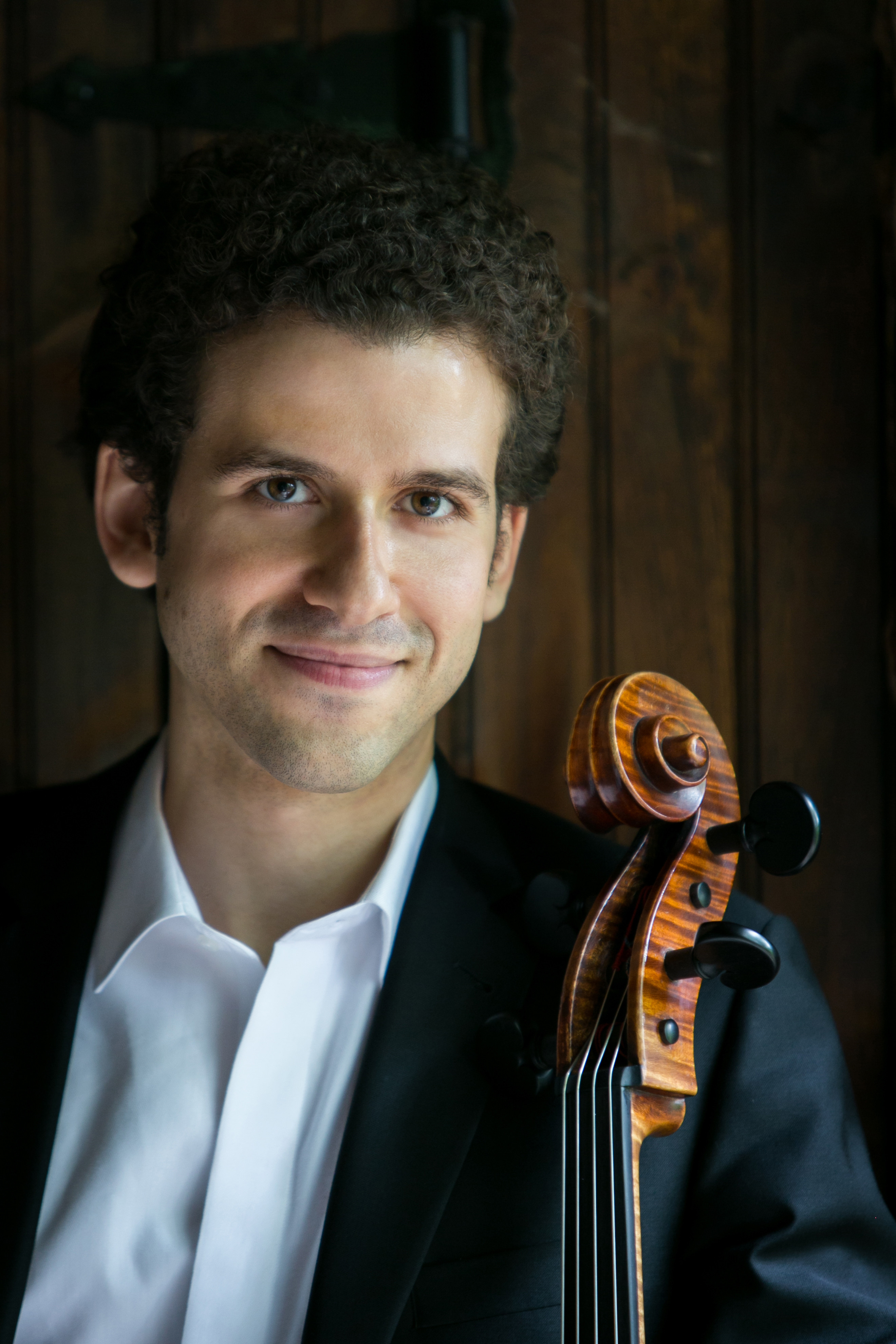 Written at the end of his life, Tchaikovsky’s Symphony No. 6, the Pathetique, is among the most personal statements in the symphonic repertoire. This autobiographical work is a reflection on a life full of personal struggle and connects with the listener on an intimate level. Hailed as a “superb young soloist” by the New York Times, Nicholas Canellakis, will bring Schumann’s Cello Concerto to life. Theofanidis’ Visions and Miracles, opens this concert with its joyous and uplifting spirit.

Visions and Miracles began life as a piece written for three different string quartets (Cassatt, Muir, and Cuartetto Latinoamericano) on a commission from the Barlow Endowment. Previously, he had written some “fairly gritty and dark” string pieces. As he explained in an interview with Molly Sheridan for NewMusicBox, “Somebody told me, ‘You’re gonna be happy when you’re ready to be happy.’ . . . I thought, ‘You know, I want to write a really up piece.’ So I wrote three up movements. . .”

For the program notes for a quartet performance of Visions and Miracles at Yale, Theofanidis wrote

I was listening regularly to the medieval Spanish work, the Cantigas de Santa Maria, performed by the wonderful early music group, Ensemble Alcatraz. This music              struck me as both joyous and artful, and its asymmetric melodic and rhythmic character became a major inspiration for me in composing this work.

Fragments of poetry inspired each of the movements. The first movement comes from Friedrich Nietzche, “All joy wills eternity.” It is blisteringly fast—232 beats per minute—beginning with driving force and unpredictable accentuation. The ebullience is broken up by moments of ethereal quiet. The second movement was inspired by Timothy Leary, “the counterculture guru from the ’60s, Harvard professor run amok,” who had his cremated ashes sent into space in a vial with the words “Peace Love Light YOUMEONE.” Out-of-sync rising scales played over a drone characterize this movement. Words from a medieval troubadour song, “I add brilliance to the sun” inspire the last movement. Irregularly accented rhythms predominate while the technical demands are, indeed, brilliant. In 2002, the composer reworked the piece for string orchestra.

Christopher Theofanidis has had performances by many leading orchestras from around the world, including the London Symphony, the New York Philharmonic, the Philadelphia Orchestra, the Atlanta Symphony, the Moscow Soloists, the National, Baltimore, St. Louis, and Detroit Symphonies, among many others. He has also served as Composer of the Year for the Pittsburgh Symphony during their 2006-07 season, for which he wrote a violin concerto for Sarah Chang.

Mr. Theofanidis holds degrees from Yale, the Eastman School of Music, and the University of Houston, and has been the recipient of the International Masterprize, the Rome Prize, a Guggenheim fellowship, a Fulbright fellowship to France to study with Tristan Mural at IRCAM, a Tanglewood fellowship, and two fellowships from the American Academy of Arts and Letters. In 2007 he was nominated for a Grammy award for best composition for his chorus and orchestra work, The Here and Now, based on the poetry of Rumi, and in 2017 for his bassoon concerto. His orchestral work, Rainbow Body, has been one of the most performed new orchestral works of the new millennium, having been performed by over 150 orchestras internationally.

He has a long-standing relationship with the Atlanta Symphony and Maestro Robert Spano, and has four recordings with them, including his concert length oratorio, Creation/Creator. His work, Dreamtime Ancestors, for the orchestral consortium New Music for America, has been played by over fifty orchestras over the past two seasons. He has served as a delegate to the US-Japan Foundation’s Leadership Program, and he is a former faculty member of the Peabody Conservatory of Johns Hopkins University as well as the Juilliard School. Mr. Theofanidis is currently a professor at Yale University, and composer-in-residence and co-director of the composition program at the Aspen Music Festival.

Concerto in A Minor for Violoncello and Orchestra, Op. 129

Robert Schumann was a prolific composer who wrote obsessively in one genre before he would turn to the next. Schumann was also an (ineffective) music teacher at the Leipzig Conservatory, and a conductor—of rather limited ability. However, it was as founder and editor of the music journal Neue Zeitschrift für Music that he made his mark as the leading representative of German Romanticism. His writings proclaimed a “new” music. He championed young composers such as Johannes Brahms, and performers such as his wife.

Robert and Clara lived in Dresden, but after being rejected to fill the opera post there that was suddenly vacated by Richard Wagner who was running from the law, they moved to Düsseldorf. Barely one month after arriving, Robert began work on his Cello Concerto. He finished it in just two weeks. This short work—he called it a “Concert-piece” instead of a Concerto—embodies Robert’s romantic outlook. He avoided composing just to show off the technical virtuosity of a soloist. He got rid of those extended sections where the orchestra plays and the soloist does nothing. Detesting the commotion common between movements of a typical concerto—where audiences applaud, cough, and squirm—he linked all of the movements together without any pause. He linked the movements together thematically as well, unifying the entire work.

The woodwinds begin the first movement with three soft chords. Immediately the cello launches into a beautiful theme accompanied very simply by the orchestra. The first theme ends with a climactic flourish. Finally, the orchestra gets to play a robust interlude. The cello then gets a second theme. It has a lyrical, light character. After a central section that has the orchestra and cellist tossing bits of both themes back and forth, the first and second themes get a full restatement. The orchestra then goes on to set up what would normally be a cadenza (a sort of quasi-improvised section played entirely alone by the soloist). Instead, the three woodwind chords from the beginning come back, and suddenly the second movement has begun.

It is a simple, beautiful song for the cello. The orchestra accompanies with soft plucked strings, an occasional woodwind utterance, and help from the principal cellist of the orchestra playing along as in a duet. The first theme from the first movement comes back briefly at the end of this movement. It introduces a sort of dialogue between the soloist and orchestra, resembling a recitative from an opera that launches the final movement.

The energy of the third movement stands in contrast to the lyricism of the first two. In spite of its formidable difficulty, this movement isn’t a vacuous display of technique. Schumann uses those three soft woodwind chords from the beginning of the concerto as three short punctuations to the busy-ness of the movement. It also contains snippets from the themes of the first movement and, finally, a cadenza. It is an unusual cadenza because the orchestra accompanies the soloist. The cello comes out of the cadenza into an even brisker tempo to finish out the piece.

Schumann’s time in Düsseldorf was short-lived. He was asked to resign only two years after he arrived. Two years after that, Schumann’s mental illness had progressed to the point that he asked to be confined in an asylum. He never heard his Cello Concerto. It got its premiere on June 8, 1860, on a concert celebrating Schumann’s fiftieth birthday. He had been dead for nearly four years.

Shortly after he compiled an orchestral suite from his Nutcracker ballet, Tchaikovsky scribbled down the plan for what he hoped would be his next symphony: “The ultimate essence of the plan of the symphony is LIFE. First movement—all impulsive passion, confidence, thirst for activity. Must be short. (Finale DEATH—result of collapse.) Second movement love; third disappointments; fourth ends dying away (also short).” After working on the symphony, Tchaikovsky changed his mind. “My impression of it was most unflattering . . . there is nothing particularly interesting or symphonic in it,” he wrote to his nephew Bob Davidov. “I decided to throw it away and forget about it. This is an irreversible decision, and it is wonderful that I made it.”

Tchaikovsky didn’t really destroy the work on that symphony. He eventually used parts of it for his third piano concerto. He didn’t give up the idea of the symphony either. In another letter to Davidov he wrote,

During my stay in Paris last December, I had the idea of writing a program symphony; but to a program that should remain an enigma for everyone but myself: let                 them try and guess it! For my part, I intend to call it simply ‘Program Symphony.’ The theme of it is full of subjective feeling, so much so that as I was mentally                       composing it during the journey, I frequently shed tears. As soon as I arrived, I set to work with such ardor that in four days the first movement was done, and the               rest clearly thought out in my head. The first half of the third movement is just finished. There will be numerous innovations from the formal point of view: the                     finale, for instance, is to be not a noisy allegro, but a long adagio. You cannot imagine how happy I am at not being ‘washed up’ and knowing that I am still able to               work.

The symphony begins with an introductory motive played very quietly and slowly by the bassoon. Shortly after, the body of the work begins with the same motive played faster by the strings. The character of this first theme is full of impulsive passion. The famous second theme is a real contrast. It is slow and hushed. These two themes form the exposition of the first movement that, in spite of its unique sentiment, still follows the standard symphonic form with a development and recapitulation.

The second and third movements do not follow the normal scheme of a symphony. The second movement is a lilting sort of waltz instead of a slow somber thing, and it has a strange limp to it. Its rhythm is in five—not the typical three. The third movement is an entirely unexpected march. The character of this march is so heroic that some conductors, wanting to end concerts on a more positive note, have reversed the order of the third and fourth movements! Both themes of the finale are based upon descending melodic motives, giving it a brooding and sorrowful character. The symphony ends with the same gloominess that it begins.

After he finished writing the symphony, Tchaikovsky confessed to his nephew, “I consider this symphony the best thing I have ever done. In any case, it is the most deeply felt. And I love it as I have never loved any of my compositions.”

Tchaikovsky died nine days after its premiere, a victim of cholera.