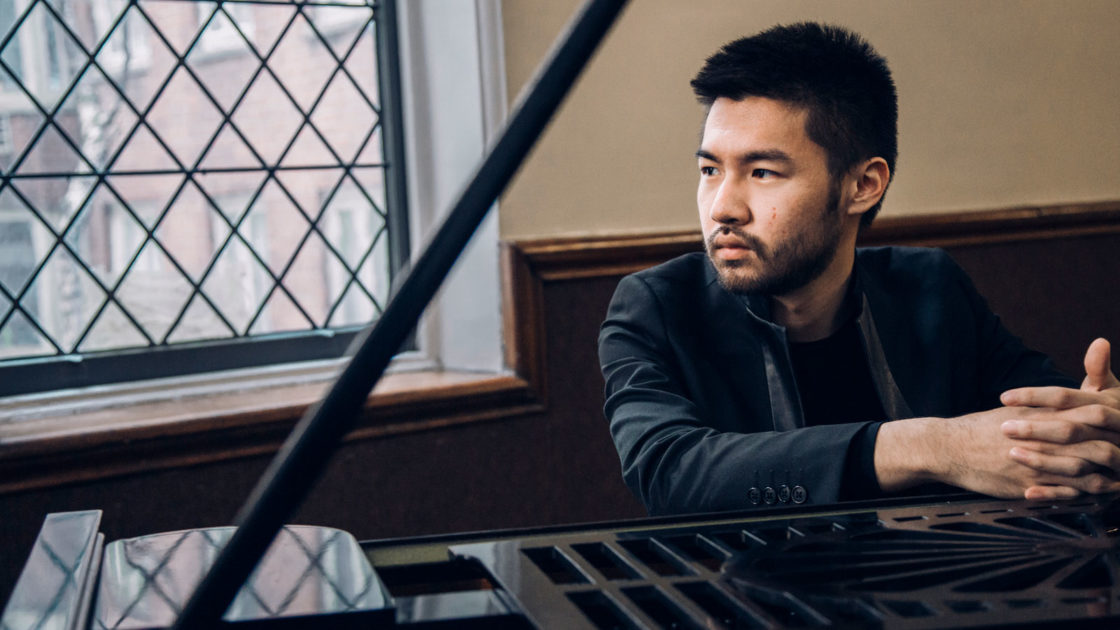 Guest Artist Conrad Tao leads the way as Lansing Symphony Orchestra performs pieces by some of the most prolific composers to ever grace the stage. From Mozart’s Piano Concerto in C Minor to Haydn’s humorous Symphony No. 90, the evening will feature beloved works from the classical era.

Haydn worked for nearly thirty years for the famed Esterházy family, the richest in all Hungary. Its head, Prince Nikolaus, was an ardent music fan and an amateur musician himself. He built a spectacular “summer home,” Esterháza, which rivaled Versailles and Schönbrunn in its grandeur. Music was continually present at Esterháza (there were 1038 opera performances between 1780 and 1790), and it was Haydn’s job to provide it. Haydn’s contract with the Prince detailed his responsibilities:

Joseph Haydn will daily, whether in Vienna or elsewhere in his territories, appear both morning and afternoon at the princely antechamber to inquire whether his Highness wishes a concert be given. If he be so commanded, he will notify the other musicians and be attentive to be sure that not only he but the other musicians as well appear at the stipulated time . . . [he] should take charge of all musical activities and all musical instruments with assiduousness . . . [he] will be bound to compose such music as his Serene Highness shall command, and not let such compositions be communicated to any other party, much less be copied, but they shall remain for his use only and his rightful ownership, and he shall not, without knowledge and permission, compose for any other person.

Initially the artistic atmosphere was exhilarating – “where I should like to live and die.” However, toward the end of his tenure at Esterháza, Haydn began to chafe at the relative isolation of the place – “I am forced to remain here . . . it really is sad always to be a slave.”

He wrote literally thousands of works for Prince Esterházy. How is it that the prince never got bored with Haydn’s style and hired someone else? Haydn explained the trick to his biographer Georg August Griesinger:

The Prince was satisfied with all my works, I received applause, as head of the orchestra I was able to experiment, to observe what made a strong impression and what weakened this, in other words, to correct, supplement, cut, take risks. I was cut off from the world. No one could cause me to doubt myself and torment me, and so I had to be original.

In spite of his isolation in the “country,” Haydn’s reputation spread throughout Europe. A new contract with his prince allowed him to write for others. Thus, in 1788, Haydn received a sumptuous commission for three symphonies from the Count d’Ogny for the Concert de la Loge Olympique. (An earlier six-symphony set, now known as the “Paris Symphonies,” was also commissioned by the Concert de la Loge Olympique. The Symphony no. 90 in C Major is the first of the later set of three.)

This symphony follows the typical plan that Haydn settled on for most of his later symphonies. The first movement begins hesitatingly with a slow introduction that dissolves into a cheery and brilliant fast tempo. The flute introduces a second theme into the movement. The second movement is a set of variations on two themes, one in major and the other in minor. The menuetto has a stately feel to it. The oboe introduces and dominates the trio section. The final movement begins quietly but is filled with flash-and-dash and Haydnesque wit and charm. If you’ve ever wondered when to applaud at orchestra concerts, here’s a spoiler alert. You’ll think it’s over—but it’s not.

When Mozart finally escaped from the oppressive clutches of his father and the stifling atmosphere of Salzburg and settled in Vienna, he had one major problem. He didn’t have a job. To make money he would present an “academy”—a benefit concert for himself—in one of the large halls in the city. Competition for such a space was fierce. The only time he could get into one of these halls was during Advent or Lent—when staged productions like operas were prohibited. He made a lot of money at those concerts, but to make even more Mozart presented a series of concerts in smaller locations, like inns or ballrooms, and sold subscriptions for the whole group in advance. He recounted his life in Vienna in a letter to his father:

You must forgive me if I don’t write very much, but it is impossible to find time to do so, as I am giving three subscription concerts in Trattner’s room on the last three Wednesdays of Lent, beginning on March 17. I have a hundred subscribers already and shall easily get another thirty. . . . Well, as you may imagine, I must play some new works—and therefore I must compose. The whole morning is taken up with pupils and almost every evening I have to play. . . . Well, haven’t I enough to do?

Mozart probably performed his Piano Concerto in C Minor at his academy on April 7, 1786. It is one of only two piano concertos in a minor key that Mozart wrote. It has the largest orchestra of any concerto by Mozart. Because Mozart played the solo himself, he didn’t bother writing out much of the piano part and improvised as he went along. The dark and stormy first movement has an atypical triple meter. It begins with a hushed sense and then erupts with vehemence, never really escaping its serious tone. The piano starts the second movement with an understated melody that returns often, framing episodes featuring the woodwinds.

The last movement is a set of eight variations based on an understated minor melody. There are brief flashes of happiness, but the concerto insists on ending in a tempestuous and minor mood. When Beethoven heard this concerto, considered by many to be Mozart’s finest, he reportedly said to a friend “[we] shall never be able to do anything like that."

Paris in the early part of the twentieth century was in the front lines of modern art. Countless artists from all over the globe flocked there. The Russian composer Igor Stravinsky made a big splash in Paris with his Rite of Spring. The Spanish artist Pablo Picasso developed his influential cubist style there. The American poet Gertrude Stein (“A rose is a rose is a rose”) lived in Paris during this time. Native French composers were also making their mark in Paris. An iconoclastic bunch of young composers, labeled “Les Six” by a newspaper, gathered themselves around the composer Eric Satie and the poet Jean Cocteau. Members of “Les Six” included Georges Auric, Darius Milhaud, Arthur Honegger, Germaine Tailleferre, Louis Durey and Francis Poulenc. The organizing principle of this group was that French music must free itself from foreign traits, particularly the German ones. These composers used common life as their subject matter, and they celebrated and exploited machines in their music. They emulated the music hall and circus bands. They incorporated jazz into their “serious” music. The principle qualities of this new French music were “dryness, brevity, and straightforwardness”—and a great deal of irreverence and flippancy.

The most flippant member of “Les Six” was Francis Poulenc. Much of his music is light, airy, witty, and effervescent. Complexity is not part of his vocabulary. Easily understandable melodies permeate his music. Only after 1936, when his friend and fellow composer Pierre-Octave Ferroud died in an automobile accident, did Poulenc seem to get serious and lose some of his irreverence—but not entirely.

Francis Poulenc grew up in comfortable circumstances. His father was a wealthy businessman who managed the family firm. His mother was a fine pianist who was also part of the Parisian cultural elite. She encouraged Francis towards the piano while is father steered him towards a more classical education. In his later teen years, he hooked up with the other composers of “Les Six” and also studied composition with Charles Koechlin.

In the 1930s, Poulenc started experimenting with “neo-classicism,” an attempt to return to the directness and simplicity of the music of the 1800s. The arch-modernist Igor Stravinsky had started his neo-classical phase in the 1920s, and now it was Poulenc’s turn. One of Poulenc’s first neo-classical works was his Concerto for Two Pianos written for Winnaretta Singer, the heiress to the sewing machine fortune. As a result of its success, Poulenc was commissioned to write incidental music for a play by Edouard Boudet about Margot, the wife of Henri Navarre. Because this play was about a sixteenth-century Frenchwoman, Poulenc decided to use the music of a sixteenth-century French composer, Claude Gervaise.

He simply took seven short pieces from Gervaise’s Libre de Danceries and dressed them up with twentieth-century style. The melodies and rhythms (for the most part) are all Gervaise’s. The scoring for two oboes, two bassoons, two trumpets, three trombones, harpsichord and percussion is all Poulenc’s idea as are the piquant harmonies, so indicative of Poulenc’s wit.