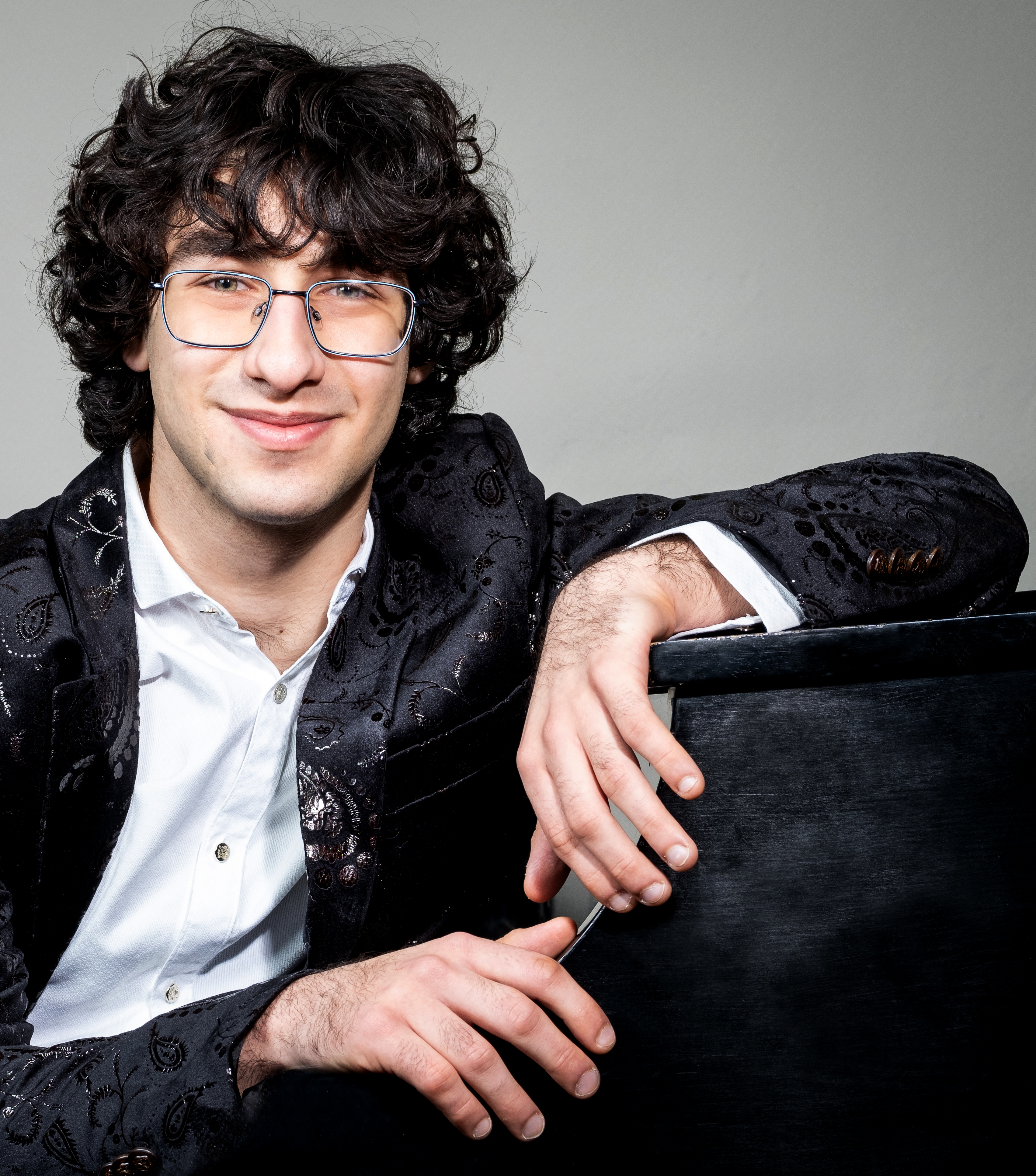 May 8, 2020
7:30 PM
Wharton Center for Performing Arts
This event has passed. See all upcoming events.

Placing the health and safety of our patrons and musicians first, the Lansing Symphony Orchestra has decided to cancel the “Brahms Symphony No. 2” concert on Friday, June 26th @ 7:30 pm.

As a ticket holder for this concert, you have two options:

2)    Request a refund.  Bring or mail your original tickets to the Lansing Symphony office.*

Please call the LSO office at 517-487-5001 for assistance with your ticket(s). We sincerely apologize for any inconvenience this may pose and thank you for your understanding and continued support of the LSO.

Mr. Harlin provides the following comments: The drive to explore is universal, whether in music, art, or good old-fashioned adventure. In 1913/14 President Theodore Roosevelt and a figure of equal energy and importance, Brazilian General Cândido Rondon, co-led an expedition exploring one of the last major uncharted tributaries of the Amazon River, the RIVER OF DOUBT (Rio Da Dúvida). Expedition member and naturalist George Cherrie wrote of the night soundscape, “Let there be the least break of harmony of sound, and instantly there succeeds a deathlike silence, while all living things wait in dread for the inevitable shriek that follows the night prowler’s stealthy spring.”
Written in commemoration of the 100th anniversary of this trip, each movement takes on a different aspect of this story:

I.    River of Doubt is an entry into the unknown, a decision which offers no option of turning back

III.    Is an examination of excitement of exploration through the boundless energy and influence of the indigenous advocate, and explorer Cândido Rondon

In 1913, with the exception of Antarctica, South America was the least charted continent. The expedition was in many ways a disaster. One member of the team turned on another and was murdered. The killer was left behind to die. After suffering a major injury, Roosevelt nearly committed suicide to prevent his expedition members from perishing while awaiting his recovery. By the end of the ordeal, Roosevelt was a ghost of his former self, fifty pounds lighter and thought to have sustained injuries that ultimately shortened his life.

The Amazon is full of mystery. Expedition members nearly starved in one of the most lush and biodiverse regions in the world. It was later discovered that the expedition was shadowed by indigenous tribes living in the dense jungle (for whom Cândido Rondon was a tireless advocate) over a large portion of their expedition. In her eponymous book, author Candice Millard describes how the men encountered a number of huts which were recently vacated days, if not hours, prior. These departures nearly elided with the expedition arrival.

In 2014, I wrote a grant to travel to the Amazon to record soundscapes. I hired indigenous guides to help lead me into remote parts of this basin, not unlike those experienced by Roosevelt and Rondon. I agree with George Cherrie, it is not the sounds but rather the sudden cessation of sound that causes alarm. While the historical record of the RIVER OF DOUBT expedition is rich, the music is not strictly programmatic. Rather the story of this expedition serves as a launching point for a musical journey into the unknown, a portrait of foreign landscapes, of fog on an unexplored river punctuated by birdcalls, the grandeur of the cloud forest landscapes, and the lives of two extraordinary figures Cândido Rondon and Theodore Roosevelt.

The biographer James Harding tells the story of a devout French peasant who bought a packet of chocolate that also contained a picture of a saint—one of a series of pictures of famous people given free with the confections, sort of like baseball trading cards. The peasant’s son was seriously ill, and, since all of her previous prayers had gone unanswered, she decided to try this particular saint, vowing to always wear his picture. The boy recovered and ever afterwards, “she carried reverently attached to her bosom the yellowing likeness of Camille Saint-Saëns.”

Such was the fame of this prolific composer. Born only seven years after the death of Beethoven, Saint-Saëns lived through most of the shaping revolutions in European classical music and lived long enough to be the first established composer to write for films (1908)! A true child prodigy, he composed his first piano composition at the age of three. His debut piano recital, given when he was ten, included a concerto by Mozart, solos by Handel, Kalkbrenner, Hummel, and Bach, and the third concerto by Beethoven, all performed from memory. For an encore, he offered to play any of Beethoven's thirty-two piano sonatas from memory.

“I live in music like a fish in water,” he stated. For him, composing music came as naturally and easily “as an apple tree produces apples.” He composed his first symphony at the age of 13. Over a very long and productive life, he wrote nearly 200 works in almost every genre: operas, ballets, sacred works, songs, symphonies, chamber music, and lots of music for solo piano. He wrote five concertos for the piano, three for the violin and two for the cello. The music he wrote exhibited characteristics of both the classical and romantic traditions.

In 1868, the great Russian pianist Anton Rubinstein was in Paris giving a series of eight concerts. On his third concert, he performed one of his own concertos with Saint- Saëns as the conductor. Rubinstein was also a conductor and lamented to Saint-Saëns that Paris had yet to hear him conduct. He proposed that Saint- Saëns write a concerto for himself to play and Rubinstein to conduct. The problem was that the proposed concert was only three weeks away! Amazingly, Saint-Saëns dashed off a piano concerto in just seventeen days, leaving just enough time to write out the parts and rehearse the orchestra. Unfortunately, there wasn’t enough time for the composer to actually practice the music he wrote for himself! The first performance didn’t go very well. The audience and critics were none too pleased. Nevertheless, Franz Liszt soon became a champion of the piece, and it quickly became a favorite of pianists and audiences alike.

The first movement begins with the piano alone, sounding like an improvised fantasia by Bach. It leads into the main theme, a tune that Saint-Saëns “borrowed” from Gabriel Fauré, one of his students. “Give it to me, I can make something of this,” Saint-Saëns reportedly said. This whole movement sounds more like the traditional slow movement of a concerto and ends with a short return to the opening material. The second movement is a lighthearted scherzo, full of Saint-Saëns’ typical wit. The last movement is even faster and lighter, giving the pianist all sorts of opportunity for a display of bravura. Someone once remarked that this concerto “begins with Bach and ends with Offenbach.”

These days, the popular characterization of Brahms is that of a melancholy, forever-old man: balding, with a long, disheveled gray beard. We listen to his music as if he were always stuck in the autumn of his life. Still, Brahms was young once and, at the time he wrote his Second Symphony, even happy! In the summer of 1877, he was in the village of Pörtschach in southern Austria. There were inspirational views of snow-capped peaks towering over the lake, the eating was good and, as Brahms wrote to the critic Eduard Hanslick, “The melodies fly so thick here that you have to be careful not to step on one.” Just the year before, Brahms finally broke his decades-long symphonic writer’s block by finishing his First Symphony—what Hans von Bülow called “Beethoven’s Tenth.” He was in a cheery mood and produced this light-hearted work, his Second Symphony, in about four months.

He was also in a playful mood. This is undoubtedly Brahms’s cheeriest symphony. However, writing to a friend the day before the symphony’s premiere, he claimed that the orchestra would play “with crepe bands on their sleeves because of its dirge-like effect.” He wrote to his publisher, “The new symphony is so melancholic that you can’t stand it. I have never written anything so sad, so minor-ish: the score must appear with a black border.”
Writing to another friend, he claimed that his Second Symphony wasn’t really a symphony, but more like a serenade:

You have only to sit down at the piano and with your little feet on both pedals alternatingly, strike the chord of F minor several times in succession, first in the treble, then in the bass, fortissimo (very loud) and pianissimo (very soft), and you will gradually get a vivid impression of my latest.

The joke is that the symphony is in D major, containing not one F minor chord!

Maybe Brahms wasn’t being so funny when he described this symphony to friends. There are some dark moments, most notably near the beginning of the first movement, when the timpani sound a roll like distant thunder and the trombones play dark, ominous chords. Vincenz Lachner wrote to Brahms asking why he injected this darkness into such a lighthearted work. Brahms replied: “I would have to confess that I am . . . a severely melancholic person, that black wings are constantly flapping about us.”

After a performance of a Brahms symphony, the critic Virgil Thomson once heard a patron exclaim, “Brahms is so dependable!” This symphony is no exception. All of the movements follow the normal pattern for a symphony. The first movement presents the opening theme right away. In it you’ll hear the motives which permeate the entire work. The second theme, played by the cellos and violas, is typical for Brahms: soaring and lyrical. The melody in the second movement is an extended one, again played by the cellos. After a contrasting middle section, it comes back at the end of the movement, this time ornamented by the rest of the orchestra.

The third movement is a gentle little Austrian dance with a kick on the third beat, known as a Ländler. Two faster and more robust episodes interrupt the pastoral setting. The final movement begins in a hushed manner. As it progresses, it becomes more ebullient until even the trombones, who were responsible for the only gloom in the first movement, join the merrymaking and go out in a blaze of glory.